BigAirBag responding to the Gibraltar Calling

By Lucas8th September 2017No Comments

Gibraltar was HOT (well, more than usual) during the Gibraltar Calling presented by MTV during the weekend of 2nd and 3rd of September 2017. MTV topped off the summer of epic live music across 2 massive stages and it went OFF! Countless people from around the globe came to check out international DJ Steve Aoki and the legendary Ricky Martin, a few names that brought their A-game in the blistering heat.

BigAirBag also brought their A-Game. Where the artist lifted up the people, the BigAirBag Revolution was there to smoothen their landing. The BigAirBag crew were happy to assist them to develop their air bag freefall gymnastics, while also setting the correct example with a few flips and tricks. The festival further committed to showcasing talent, with a stage dedicated to exciting local brands and artists. 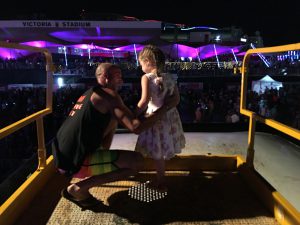 This brave young girl showing the crowd how an air bag freefall is done.

In the event that the bag jump may have been too scary for the younglings, there was also a kid’s playground and adventure area where they could possibly prepare for the bigger Airbag stunts in the future.

Once again, BigAirBag was proud to be part of this fantastic festival and look forward to collab again in the next edition of Gibraltar Calling!